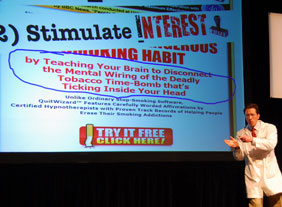 QUESTION: Is there a “scientific” way to persuade consumers to buy?

The Dual Process approach is extremely useful to advertisers, and is based on four assumptions about psychology and influence:

One is the “systematic” mode and the other is the “heuristic” mode.

The systematic mode refers to a process that uses careful and conscious thought.

Unlike a person using the systematic mode, those in the heuristic mode are thinking only enough to be aware of the situation, but not carefully enough to notice any errors or
inconsistencies.

Assumption 2: Situational and personality variables affect which mode a person will employ.

People are flexible in their thinking and are able to switch between the two modes. Sometimes they’re systematic and other times they’re heuristic. The mode used depends on situational and personality factors.

Example? Ok. Consider a product and ad that have strong personal relevance for a consumer (something they urgently require, or a purchase that they’re currently strongly considering). People in this “space” will typically use the systematic mode of thinking.

However if a product is irrelevant to them (such as a product that they don’t really require, or one that they had no current thoughts of purchasing), then they’re more likely to use the heuristic mode of thinking.

In addition to these situational factors, there are also individual preferences for particular modes of thinking. Some people tend to carefully about things most of the time, while others exhibit a low need for “deep cognition” and typically think as little as possible when making less than critical purchases.

Assumption 3: Persuasion variables will have different effects depending upon the mode of thinking employed.

When people are in the systematic mode, certain arguments will be very important and influential to them, such as facts, evidence, examples, reasoning, and logic.

By contrast, when people are in the heuristic mode, cues like comparison, liking, or authority will be more influential.

Assumption 4: Influence achieved through the systematic mode is more persistent over time, more resistant to change, and more predictive of behavior than influence from the heuristic mode.

When people are thinking systematically, and they are influenced, it is more likely to produce permanent attitude change, precisely because they thought about it more
carefully, fully, and deeply.

For heuristic thinkers, however, any influence is likely to be short term and subject to further changes, simply because the influence was not processed deeply or consciously.

The importance of these assumptions to advertisers is that both the systemic path and the heuristic path are capable of the same level of attitude change in the short term.
The difference lies in the longer term, where systemic thinking produces attitudes and consumer behavior that is more persistent and resistant to change than heuristic
thinking.

However, research indicates that most people, most of the time, are in the heuristic mode — thinking only enough to suit the situation.

For this reason, and because the peripheral (heuristic) route to persuasion is easier to achieve than the central (systematic) route, the majority of advertisements concentrate on providing consumers with cues rather than arguments.

If you want to encourage systematic thinking within your prospects and produce a more long term and resilient attitude change, there are two factors that can assist you.

You do it by customizing your campaigns to target specific groups or communities, and by using ideas and language that the particular group can identify with.

EXAMPLE: Rather than claiming that all their policies are superior, an insurance firm can focus on promoting the advantages of their auto insurance for people over age 50. Immediately, that advertisement becomes personally relevant to every driver in that group and they’ll more likely to consider the arguments and evidence presented.

(Consider the exact antithesis of a campaign where NONE of the info presented is personally relevant. How deeply do you think they’d consider the ads? They’d click away in a flash.)

The strength of attitude formed by this central route also means that, if a consumer is persuaded to take out his or her insurance with this firm, based on their systematic decision, they’re more likely to remain with that company for years.

Because they thought deeply about their decision. When they think back on it, they’ll recall how well they researched it before they pulled the buying lever. “Hell… no need to investigate THAT decision again… I checked them out from A to Z years ago!”

The second important factor is comprehension, or understanding.

But many ads crash and burn because the audience is unable, or unwilling, to comprehend its message either because it’s overly complex or downright boring! That’s why it’s so important that you present your ideas and arguments in a simple manner using language that’s easily and quickly understood.

Although encouraging the central, systematic route is the preferred option for long-term preference and loyalty, there are many benefits for pursuing the peripheral, or heuristic, route.

This is especially true of “disposable,” everyday goods, such as clothing, beer, cigarettes, or snacks. In these cases, your buyer isn’t looking to be persuaded by factual evidence or persistent arguments. What they’re seeking is a product that fits their idea of fun and enjoyment.

Advertisements for bars or specific brands of alcohol, for example, offer no systematic reasons for choosing their particular product. Instead, the attractive, semi-dressed young men and women, with giant smiles, having the time of their life uses the peripheral route to influence the consumer into associating these pleasant images and feelings with the particular brand. There is no cognitive thought involved, but the heuristic persuasion is powerful, and successful, nonetheless.

What route of persuasion would work best for your product or service? Is it one requiring deep thought, or simply an abundance of images, cues, and emotionally stimulating words? With some products it’s clear. Others not so much, and can benefit from a smattering of both. But knowing in which category your product best fits, you can focus your message using the one persuasive route that’s most likely to evoke the coveted buying response.

Would you like my assistance? Email me from my Contact page. I’ll help steer you in the right direction.